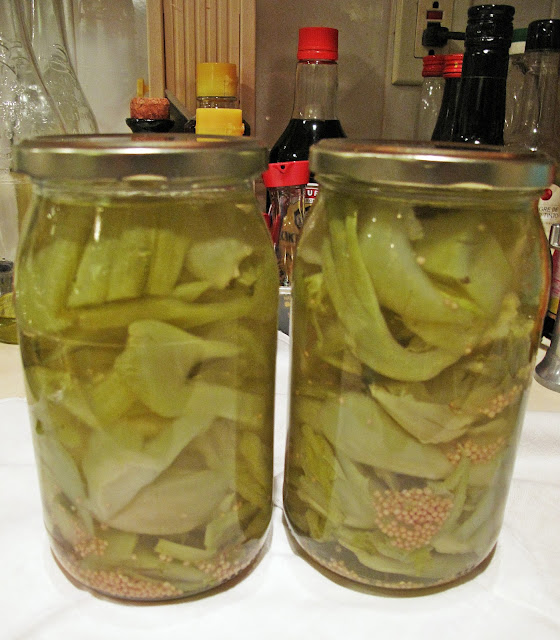 Trim away the leafy portions (save for other uses). Cut fleshy parts into bite size pieces.

Prepare brine of White Vinegar : Water (1 : 2). Boil with some salt, a good measure of sugar, and some Yellow Mustard Seeds.

Posted by David D. Wronski at 6:39 PM No comments:

Email ThisBlogThis!Share to TwitterShare to FacebookShare to Pinterest
Labels: Pickles and Ferments 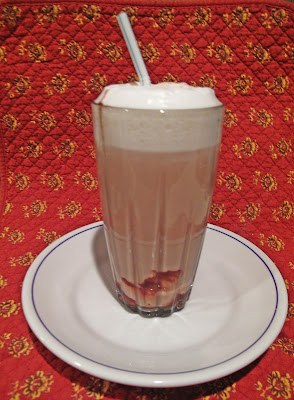 HOW TO MAKE A REAL CHOCOLATE EGG CREAM 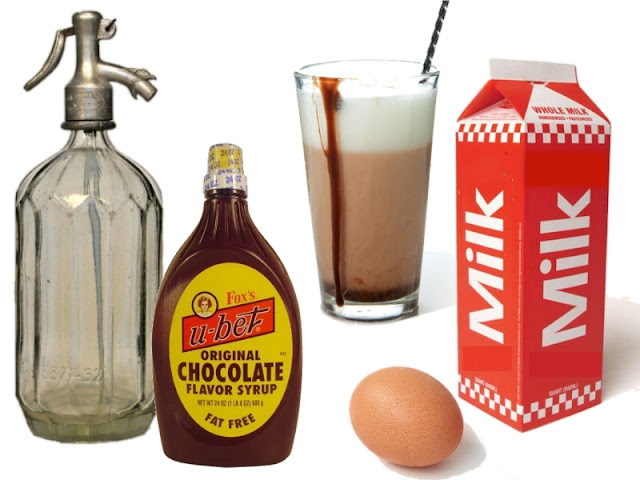 First thing to know, there's no egg in an Egg Cream Soda.

2-3 Tbsp. Chocolate U-Bet (less than an inch)
No need to measure Syrup carefully ... Eyeball it!

Fresh Seltzer. Make that ... FRESH!
If the Seltzer isn't fresh, fresh you won't get that quintessential          cappo.

Quickly toss a portion of Seltzer into the glass.
This will create that white foamy head. Careful, not so much to       overflow glass.

Using a long spoon place it into the glass under the foam and vigorously stir liquid portion. Careful no to disturb the foam cap.

There's an alternate prep method. Adding the Syrup after the Milk and Seltzer: Here it is on the Fox's U-Bet official page.

Also ... Just learned this: Fox's U-Bet is available Kosher for Passover. The recipe for that variety uses Sugar instead of Corn Syrup. We'll be on the prowl come Passover time for the righteous version.

Around Passover Fox's offers a kosher version. Sweetened with sugar, not high-fructose Corn syrup. You'll know it by the seal on the cap. 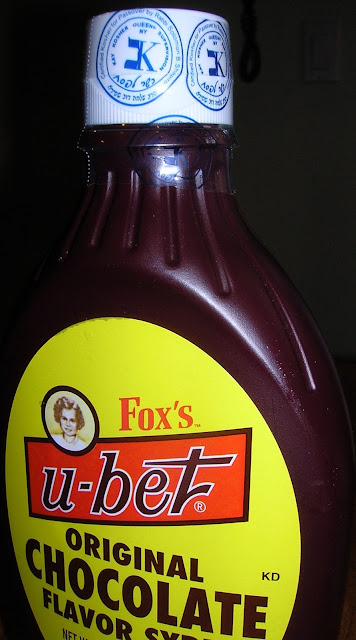 Posted by David D. Wronski at 9:40 AM No comments:

A few years ago we jumped into the culinary zeitgeist surrounding Super Bowl Sunday with our first ever "Stadium-style" snack extravaganza. 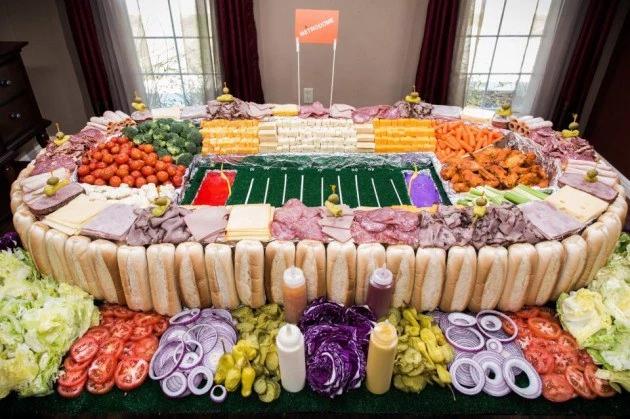 Not Actual Presentation ... But, Kind of Close

As you can see it was a knockout. A home run. It scored the winning field goal. Touchdown!

Last year we thought we'd ramp it up a notch. Since so many people were expected — more than previously owing to all the acclaim of the snack stadium — we pondered long and hard about how much to serve and how to accommodate the throng. Thus begat the Super Bowl Snack Maze.

Alas, it was decimated so fast that we didn't get a photo. It took up the entire living room transformed into a stadium of sorts. There was a stepped bleacher on all four sides of the room. A large service table floating in the center. I use the term "floating" purposely because the table was literally floating in a huge plastic kids pool filled with ice and cold ones. Astroturf on the floor, but of course. The whole set up was designed to handle four streams of traffic, each being offered the same choices at each station. The logic being ... get 'em back to the game ASAP. 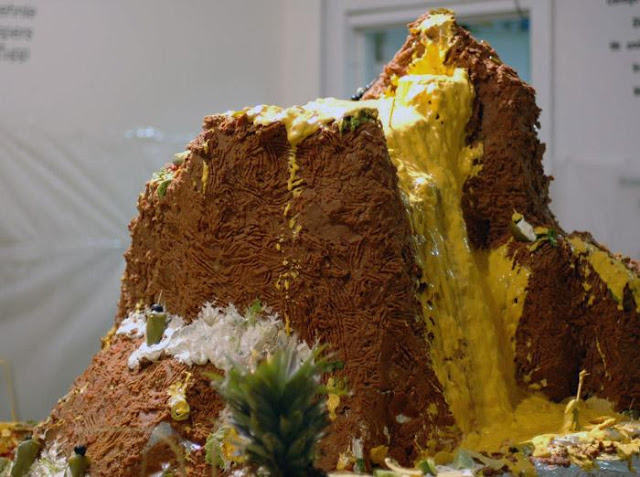 Luckily our dining room has those extra high ceilings, so a 12 foot high Nacho Mountain/Volcano — that's measured from the tabletop — is not a problem. The beauty part of this setup, besides the wow factor, is that the round base lets a whole bunch of folks dig in all at the same time.

All the usual suspect edibles. Your cold cuts. Your Chile con Carne. Bean Dip. Other ... Dips. Your Tortilla chips. Guacamole. Bacon, of course. An assortment of the sausages of the world. Brats ... that's so done. Breads, naturally. Nuts. Slim Jims. Shrimps. Other Cheeses. Other Chips. Even, Kale Chips.

But the star player, the most valuable player ... did you guess it? 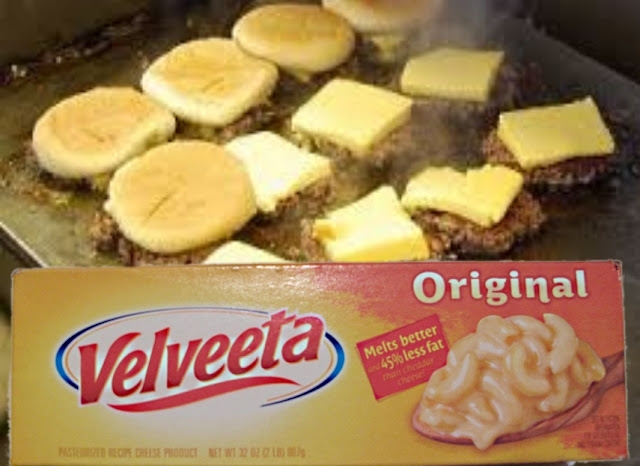 We have a friend Phyllis who has a rather sophisticated palate. So, upon request only, a good crumbly sharp aged imported artisanal Cheddar. OK, Phyllis?

We also have a cranky Uncle Luther. For him ... 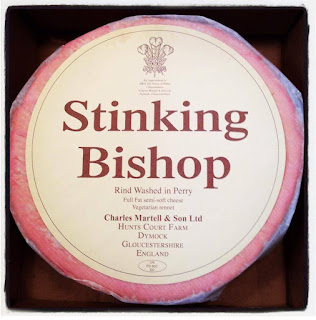 And, for Uncles and Aunties everywhere, a joke ...

The Bishop is very sick. Doctors come from all over the world to try and diagnose his illness, and finally a little Jewish psychiatrist finds the cause of the problem. He tells the cleric, "Your Eminence, because you have had nothing to do with women all your life, your hormones are unbalanced and there is only one possible cure. You must make love with a woman." "No, no!" cries the Cardinal, "I can't. All the vows I have taken ... I just can't!" "But, Your Grace," replies the shrink, "you must or you will die, and this too is a mortal sin."

The bishop retires for a few days to consider his fate, and then calls the psychiatrist again. "Okay, okay" he says, "I have reached my decision. I will do as you ask."

"But please, be sure that the she's got nice, big tits."

Last word to all you hopefuls in the culinary Super Bowl ... there's nothing more pathetic than someone shopping for Avocados on Super Bowl Sunday. Or, Shrimp.

PS That last image with the comely lass, that's a hint for plans already underway for SB 2017.

Posted by David D. Wronski at 2:06 PM No comments: