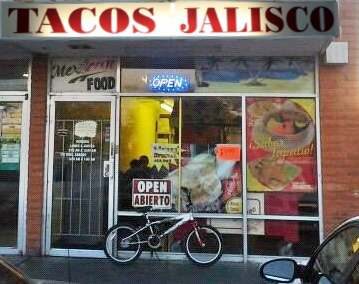 In Phoenix our top choice taco shack is Tacos Jalisco, the original spot in the largely Mexican Paiute section of Scottsdale. There as you place your order you can see the busy kitchen with mountains of one kind of meat or another cooking on one flat top and a deft hand filling orders at the other stove top warming tortilla upon tortilla. The original Tacos Jaliscos is a small, true hole in the wall, mostly Mexican patrons and in-the-know locals. Mas Sabor. It is also the kind of place that you could expect to be raided by Sheriff Joe and his posse at any time. Have your papers with you when you go. And if you don’t like to mix with the hoi poloi, it would not be your kind of place.

But, seriously, this place is great. The service is friendly yet business like. Everything is fresh, fresh, fresh. It's a busy kitchen, but your order comes out in minutes. Come on in and choose from a great assortment of delicious and well priced dishes. They have a choice of drinks: fresh fruit agua frescas, horchata, and jamaica. Or a real sugar recipe imported Mexican soft drink. 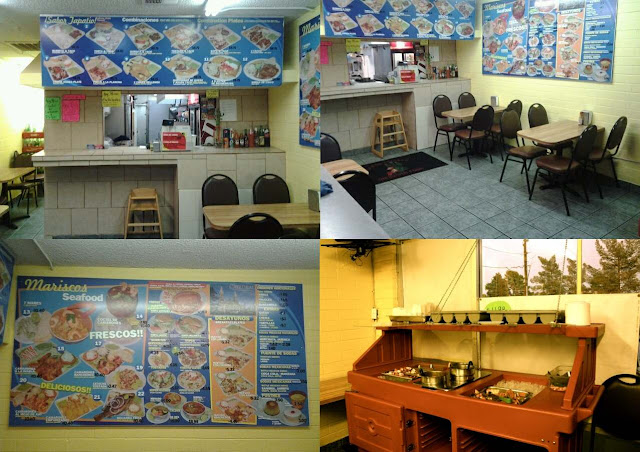 When your order arrives you will be called. Help yourself to the salad bar with a choice of home made salsas, cut pieces of radish, and house made fried jalapenos and a vinegary escabeche mixture of garden vegetables. 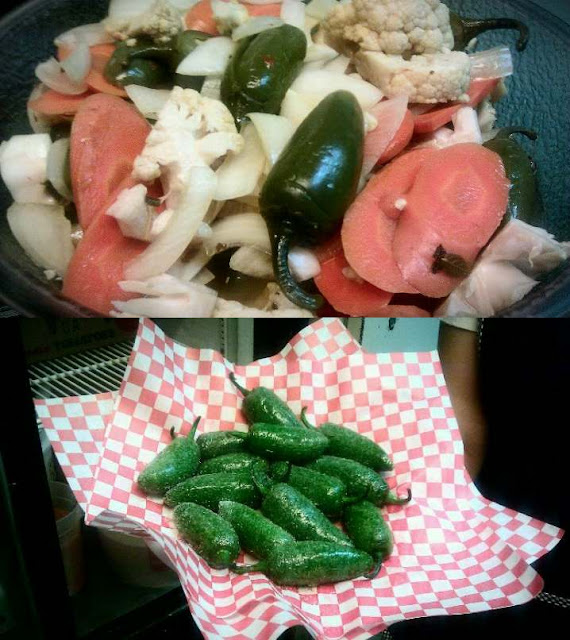 David Wronski writes:
[He goes on a bit, so be patient. If you are feeling a little, ahem, parched by the extensive and digressive verbiage, there is a refreshment at the very end to make it all worthwhile.]


These ideas come from those two enthusiastic presenters of their respective cuisines. Rick Bayless, and the vast repertory of the Mexican cuisine; and Daisy Martinez and her beloved recipes from homeland Puerto Rico.

This is written as more of an idea starter. Inspiration? You tell me. Modesty prevents me from stating that. My approach to recipes is to give the highlights and expect the reader to either be knowledgeable enough to take over, or that an Internet search will give all the chapter and verse.
As the former co-owner of one of the early proponents of fusion cuisine, The Polish Pavilion, even now as an enthusiastic home cook our kitchen sees a lot of mixed metaphoriphication, culinary-wise. Proponent? I say originator, just that we didn’t call it that. We just did it. The coinage came later. And, mind you, we didn’t make too much coin for our efforts. But, don’t get me started. I’ve moved on.


I got the inspiration for tortillas de nopal from watching a TV episode of Mexico, One Plate at Time with that mole sauce-smoothy Rick Bayless. He, together with Diane Kennedy have been at the forefront of spreading the word that Mexican food is a great, rich and varied cuisine; not just your drive-up taco joint kind of thing.


Not that there is anything wrong with a taco joint. In Phoenix the cityscape is dotted with the likes of Filibertos, Robertos, Rolibertos, Rambertos, and probably by now several other “Bertos” derivatives. Also, to mention the taqueria trucks with their late night after hours followings.


In Phoenix our top choice taco shack is Tacos Jalisco, the original spot in the largely Mexican Paiute section of Scottsdale. Check it out. There as you place your order you can see the busy kitchen with mountains of one kind of meat or another cooking on one flat top and a deft hand filling orders at the other stove top warming tortilla upon tortilla. The original Tacos Jaliscos is a small, true hole in the wall, mostly Mexican patrons and in-the-know locals. Mas Sabor. It is also the kind of place that you could expect to be raided by Sheriff Joe and his posse at any time. Have your papers with you when you go. And if you don’t like to mix with the hoi poloi, it would not be your kind of place.


I would be remiss to not mention the burritos at the Scottsdale Chevron gas station/convenience store on the Pima Indian Reservation at the intersection of Pima and Chaparral roads. The red version is a slightly stringy (machaca style) beef infused with spicy red chili; the green, that beef with mild Hatch New Mexico chilies. I always look askance at anyone overpraising any food, but those tacos are at their own level. The native ladies do know how to wrap it up.
Anyway, on his program Mr. Bayless was in Mexico with a family making flour tortillas infused with pureed nopal cactus paddles and garlic butter. Our own first attempt resulted in a dough that was a little too hard to handle. In my attempt to be sure that there was a good dollop of nopal in the dough, it came out too sticky to manage well even in the trusty tortilla press. Certainly it would not be manageable for hand rolling. Next time we’ll hold back on the liquid and go for a drier texture dough. For hand-made tortillas you need it very thin when it goes to the heated pan to finish. Otherwise, not cooked through the center. Also, next time we’ll try this combination for corn tortillas. By the way, in our preparation we lightly cooked some finely minced garlic in home-rendered lard. Yes, lard. If you haven’t heard it’s good for you, Google it. But, please, home-rendered, or rendered by some reliable butcher. Never those packaged blocks. Those are just for boat launching and college toga party favors. As you can see in this link small production tortillas de nopal are being made with the flour of the dried nopales. The readymade packaged tortillas de nopal have not arrived on our eastern shores as far as we know. Besides, home-made is best. Now to search out masa seca nopal. Wish me luck.


The second item is chili con carne. The recipe for your everyday killer chili con carne comes to us from a friend from Texas. (Click here for that recipe.) But, while it stands alone, it is also a basis to get to a great chili. Where the original called for coarse ground beef, Mr. Bayless put the idea in our head to make it machaca style: slow cooked well-trimmed shoulder cut beef browned then braised in a chili infused sauce, fork shredded to finish. Machaca, as we prefer it, is rather dense with a seriously reduced sauce. The better to fill a taco, my friend. If you want it to be a more stewy-soupy bowl of chili con carne, make more sauce or don’t let it reduce so much.


Speaking of dishes, enter dear Daisy Martinez. She’s to Puerto Rican cuisine what Bayless and Kennedy are to Mexican. From Daisy we get that culinary staple, sofrito. Per herself, ”This is the one indispensable, universal, un-live-withoutable recipe.” (Click this to see her recipe.) From that we prepared a blend of onions, cilantro, culantro, garlic, aje dulce sweet peppers, mild long green frying peppers, and tomatoes. We found some dried hoja santa leaves at our nearby Mexican market and tossed in a few of those leaves. That pureed blend we added to the basic chili con carne sauce recipe. We browned the beef in oil, set the browned beef aside, then infused it with annatto before adding in chopped onions, minced garlic, cumin, chili powder, paprika, and Mexican oregano. Instead of store boughten chili powder, we pureed toasted deseeded guajillo chilies. You can also mix and match from a wide variety of dried Mexican chilies. There is a whole world of chilies in the Mexican kitchen. (Here is a quick reference.) Also, we have some good Korean and Middle Eastern chilies and freely add them in when chilies are called for, regardless of what region the recipe comes from. Fusion, n'est-ce pas? Or, like, you don’t have to only cook Chinese food in a wok, do you?


So here it is. A soft tortilla de nopal filled with machaca style chili con carne. To serve you could butter the tortilla first, perhaps an optional schmeer of refried beans, a bed of shaved iceberg lettuce, then fill with the machaca. Top with grated cheddar or cheso blanco, some chopped hard cooked egg. Finely diced white onion, chopped cilantro leaves to top it off.


Washing it down: Here we have it from that most interesting man, cervesa por favor.
Posted by David D. Wronski at 2:49 PM No comments: