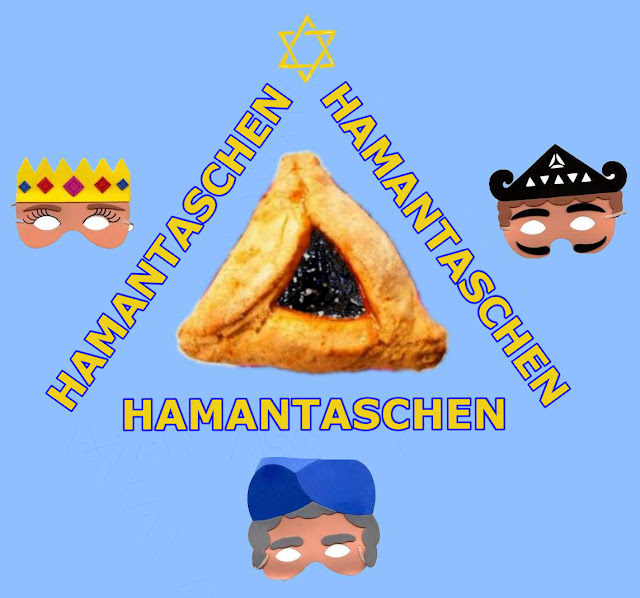 Spring is nearly upon us and everyone is feeling frisky. In India they are celebrating Holi, when everyone you see is fair game to be splashed with scented waters and doused in vivid colorful powders (dress appropriately).

Saint Patrick will have his day celebrated soon, not without a good measure of overindulgence of the spirits, small “s”. Not to disturb the Catholics, but how come there is so much public drunkenness in celebration of a Saint; and, on a day that falls in the Lenten period of fasting and abstinence. You don’t know what we’re talking about? Then spend Saint Patrick’s Day evening on the Upper East Side of Manhattan. Be afraid, be very afraid. Don’t wear your good shoes.

Ok, how about those goody, goody Jewish folk. They also celebrate. It’s called Purim. The name itself says, let’s party!

Purim is a spring advent holiday that commemorates how one beautiful woman (Queen Esther) saved her people’s (The Jews) skins from an evil-doer (Haman). Seems Haman was a Persian hoity toity and Esther’s (who was an orphan) Cousin Mordecai (he was a father to her) refused to give him props. When Esther and Mordecai learned of the plot to kill them plus all the other Jews in Persia, Esther told on Haman to her husband, the King (Ahasuerus). Pretty bold of her, since with the King you didn’t approach without an invitation (think it’s like you or me trying to walk the Red Carpet on Oscar night); and, plus, the King didn’t know she was Jewish, but he didn’t have a problem with that after he found out; not like that SOB Haman. (Does anybody see a modern day parallel here! Come on. Instead of bombs, maybe Iran could get a plate of cookies?)

And, speaking of cookies. We finally get to the point. Hamantash, or Hamantashen when you have a bag full. These triangular filled pastries are the Jewish contribution to the riddle, “‘Which end goes up?” As you might notice they are named after the aforementioned Haman. It’s a Yiddish word meaning, “Haman’s purse”. It also goes by another name, “Haman’s ear”. That’s from the old time practice of cutting off the ears of the soon to be executed. Oh, did we mention that the tables turned and instead of all the Jews, Haman got the extreme prejudice on himself. Evil is vanquished, let’s celebrate. Purim. Get it? One traditional practice is to play make believe with costumes and masks based on the characters in that story. Or, if you like, you can go with the idea that the pastry resembles Haman's three corner hat. Go here to delve even deeper.

Hamantashen. (Or, Hamantaschen, or Hamantashen, or Hamantaschen. Oy!) That Talmudic question on spelling notwithstanding, don’t let’s try to handle the deeper symbolisms baked into that great pastry.  Our friend Hilde Stone suggested we ponder “the relationship between the Hamantasch and the Triadic Heart of Shiva”. Sure, we’ll dust of our copy of Paramahansa Nityananda's Chidakasha Gita and get back to you on that. With a stop by at the Vatican to pour over some old texts revealing the Triune mystery ... the Holy Trinity.

But, for this little kitty, Hamantashen are just tasty treats. Or, per Mr. Alton Brown, “Good Eats”. They have lots of depth of flavor, not to denigrate the depth of traditional meanings and symbolisms.

Furthermore, Ms. Hilde Stone did put us on to making our Hamantashen with some cream cheese in the dough recipe. So, you asked for it. A kitty that fetches! Mirabile Dictu! Quelle Surprise!


An Internet search showed essentially two basic recipes. The recipe we are showing is from friend Norene Gilletz, a renowned authority and cookbook author on Kosher cookery. She is called the “Jewish Julia Child”. When she gave us her recipe we stopped looking. FYI, the other basic recipe calls for twice the flour as Norene’s plus sugar, egg yolk, and vanilla. We’re sure it’s also a good one, but friends first in this Cooky Test Cat Kit-chen©. Also, we’re afraid if we did the other version Norene might send us a zinger like, “Oh dough you didn’t”. So we want to stay kosher with her.

Also Norene Gilletz’s recipe appeals because it is so simple. And, undeniably excellent and delicious.

Per Her: Process 1/2 cup cold cream cheese, cut in chunks, with 1/2 cup butter or margarine, in chunks, and 1 cup flour on the steel blade in the processor. Process just until dough gathers into a ball, 18 - 20 seconds. Easy dough's it! I use 400 F for about 15 minutes. It's tried and true!! Enjoy - but cool them first so you don't burn your mouth! (Yes, Mamushka Norene.)

Making the circle of dough: The measurements in the dough recipe make eight 3 inch circles, no more than ¼ inch thick. Cut the chilled dough into half, each half again, then each half again = 8 pieces. Roll into balls then press down between wax paper with the flat side of something that won’t break; an iron skillet or a flat bottom metal bowl. Just not ceramic or glass to avoid breaking. The down pressure is not that forceful. If you want, roll out the dough into a sheet and use a circle cutter.

Shape the hamantashen into the classic three cornered hat shape. Hint: place the filling a little offset from center, near the first top-most fold. There’s a video at the bottom showing a community hamantashen throw down. You’ll get the idea about shaping somewhere in there. Or, go fetch on the Google. Note: give those corners a good pinch to make a seal and keep the shape.

Suggested Fillings: Sweet poppy seed filling, Prune Lekvar, Apricot Jam, Date-Orange filling, Apple-Raisin filling, Fig Preserves. There are as many filling possibilities as there are bakers. But, Poppy Seed, Prune Butter, Apricot, and Raspberry are fairly usual. We like lots of filling; in ours each circle gets 1 healthy tablespoon.

We would be remiss not to mention a source for properly made righteous bakery hamantashen. It’s Moishe’s Bakery in the East Village inManhattan. Moishe’s is the “King of the Kosher Bakeries.” 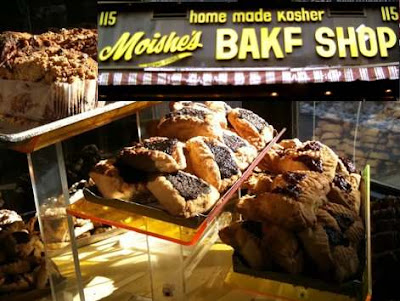 The bakery has been there now for some 39 years. Their hamantashen come in two sizes, large and really large. The latter, a meal in itself. But most delicious. Don’t be afraid to venture down to the East Village. It does look like the kind of neighborhood where you have to have a minimum of three piercings to reside there, and at least one just to set foot. But that’s another story. Just let’s say there’s a lot of local color. Some of the people just look, how you say, different. (Moishe’s is just down from where the Fillmore East used to be, and around the corner from another ethnic jewel, Surma’s UkrainianShop. A great place for artisan honey.)

It is said that hamantashen makes you youthful and beautiful. Believe it. Behold. We're thinking the young lady's name might be Esther. 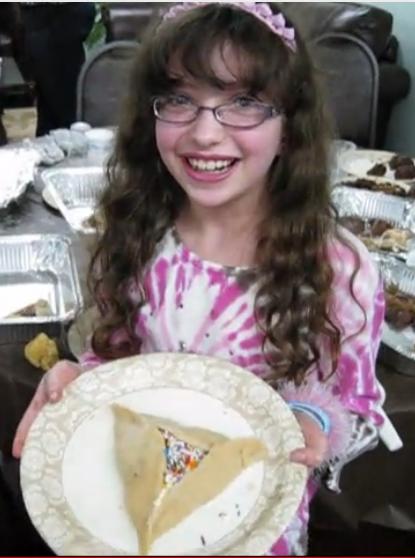