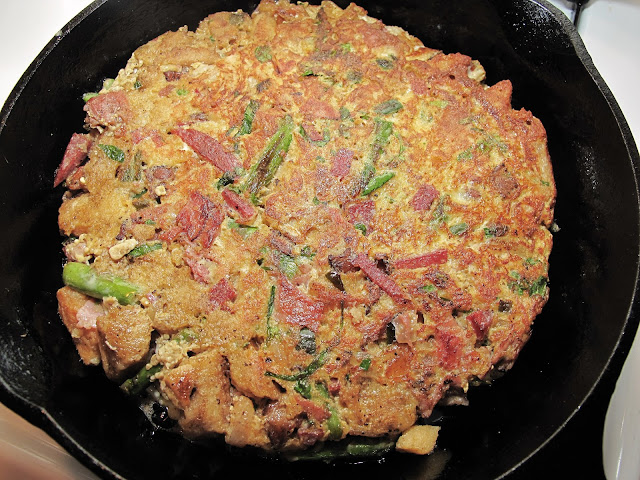 xx
﻿What is a Frittata, anyway? Just to interject that, just like any issue, the Frittata has two sides. More on that particular in a bit.

It is an Egg based distant cousin — Italian/Spanish — to the French Omelette. The Frittata by this Cat's definition has to have at least one additional ingredient, besides the Egg(s); though, when there are several add-ins, that’s what we like a Frittata to be. Also, it is cooked slowly, flat in the pan. When the bottom crust forms it is turned over in full and served (depending on size) in one piece, never folded like an omelette, or in strips. Wedges ... fine.

A Frittata is not just for breakfast. It’s for whenever, dude.

Once upon a time not too long ago in what was the Germantown section of Manhattan on the Upper East Side on 86th Street, there was a small joint of a restaurant named The Ideal. And it was. Ideal. The Ideal served the best breakfast, anywhere ever, before or since. Homemade Bratwurst and heaven’s own recipe for hash brown Potatoes. They started with whole boiled Potatoes, cut up into bite size pieces. Fried to a nice brown crust in a black steel skillet (of which they had a large on hand battery). [Every Egg dish was fried in its own skillet, not like many diners that get speed on their side by doing everything on a flat top griddle. An Omelette done on a griddle, send it back every time. And, by the way, does anyone know of a diner or breakfast joint that knows how to cook an Omelette. Mostly we’ve been getting something one step away from paper. It’s that dern griddle! And, definitely too much time on it.]

The Ideal shows up here because they had a breakfast item called the Farmer’s Breakfast. Boiled cut potatoes, eggs, Onions, and nicely done Bacon pieces all folded together, then fried to a nice crisp crust in one of those well-seasoned black steel pans. Not quite a Frittata, but close enough, for the Germans. 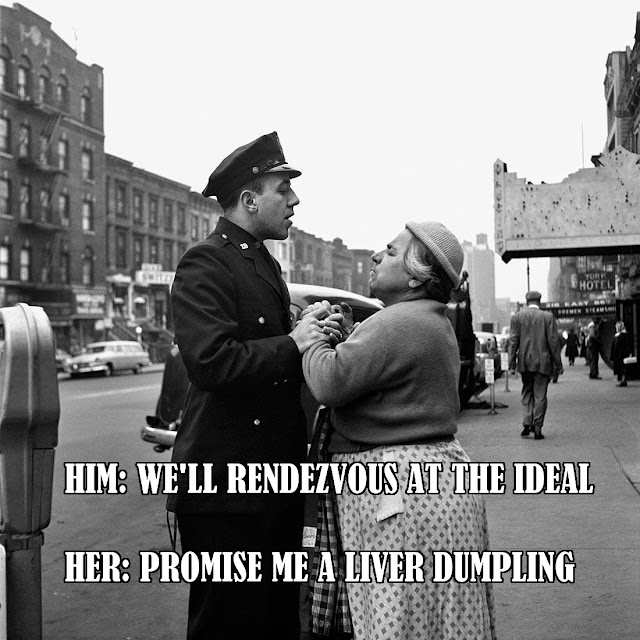 ﻿
[It also should be mentioned for posterity that The Ideal had Beer on tap. It was Germantown, after all. One brand only, Schaefer. We understand that Schaefer was the best selling beer worldwide, until Budweiser took that spot around 1970. If you were having your breakfast after 10AM the tap would then be open for business, and you got to have your “breakfast Beer”. If you don’t know the quintessential pleasure of the breakfast Beer (see Robert De Niro in The Deer Hunter for the official cool have-a-breakfast-beer reference), pour yourself a small cold one to go with your next breakfast Frittata. Go easy. Or, expect to crawl back into bed afterward.]

We’re not gonna teach you here how to make a frittata. The sources are many and it is, after all, a simple dish. But, the trick is to know when to turn it over onto the B side.

Timing in life is critical, and in the kitchen it is also so. We have the Oriental wisdom that says it all on the question of kitchen timing: Wait until the water boils before putting in the peas and carrots. (Young men, take note; this advice is also good to follow in other rooms of the house; or in the back seat of a car.)

Here it is, per the Frittata, how to know when to turn it over.

There is one question that only you will be able to decide, and that’s about how brown and crispy you want your crust. But the essential point is that it is first ready to turn when the bottom is formed into a crust. So how do you know when that is? Well, you can peek. But we don’t recommend pussyfootin’ with anything in a skillet what is not together enough to lift to look at the underside. You could break the frittata (no biggy, it’ll come back by itself; but we have a better way) and have your fussy little darlings bolt from the table. But it would be your fault for bringing them up to expect the best of everything. Like, sending in the car to fetch the Arturo’s Brick Coal Oven Pizza. (Hey, Donald Trump, Sarah Palin, would it kill "ya" and your gosh-honest blue collar souls to mosey on down to the the village and go to Arturo's for the real deal?) Or, only high end frocks and togs from Bambini on Madison avenue, never any hand-me-downs. But this is not a socio-political rant, where we get to flip our lids. It is about flippin' a Frittata. 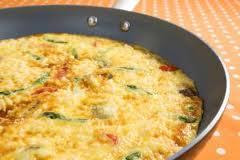 You will know that the frittata is ready to turn when it scratches the pan when you vigorously shake it to and fro. Cooky Cat says — we are shocked by his cattiness — "It should sound like your kitty pawing in the litter box". Excuse the offensive and off putting imagery in a food article. But, that’s Cooky Cat for you.

We say, it should sound like a good pair of nicely worn size 11 ½ bespoke English Peale & Co. cap toe oxfords sliding around on a 4’ X 4’ ¼” plywood panel loosely affixed to a wooden pallet with fine, safe sandbox sand covering the panel at exactly 1/8” depth (5 lbs. should do it). Simple. Cooky Cat is OK with the sandbox sand alternative. (We do keep him away from our test panel, however. Just in case. You know.)

As a bonus, we are going to repeat the instructions given in the Matzo Brei recipe for the turning of the frittata... Be sure you have a hot pad and long sleeves in case there is some hot oil spill. Place a kitchen plate face down into the pan. Then invert so the half cooked Matzo Brei is now uncooked side down on the plate. Slide it back into the pan to finish the other side. It’s very easy; just do cover your arm when flipping half way through the cooking process.

Enough talk. Get in that kitchen and mix something together ... and make your own Frittata.
Posted by David D. Wronski at 3:16 PM