YOU CAN COUNT* ON IT… SOUP! 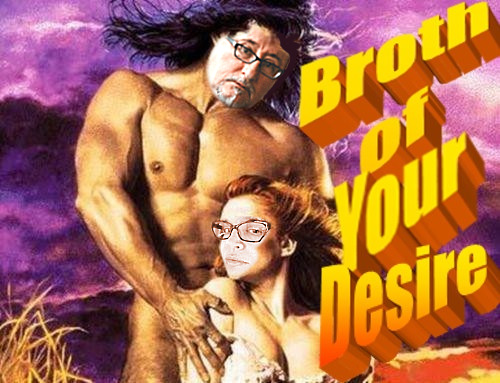 ﻿
Who doesn’t like a nice bowl of soup? I most certainly do (like soup, that is). How about you, soup-wise?

Like Jerry Seinfeld, did you ever think about soup? Or wonder about soup?

Just look at the word “soup” itself. Soup, soup, soup, soup, soup, soup. Who came up with that spelling— “s” “o” “u” “p”. Look at “soup” long enough and those four little letters lose all their meaning. Same for a rose; I wonder if there is a rose soup?

To define “soup”: my simplest— a food made with a liquid into which a flavor is added.

Soups always have a liquid component, be they thin or thick, and regardless of the amount and types of solid type ingredients. A soup becomes a stew when it is really thick, but still mama could call it soup. EAT YOUR SOUP!, you ungrateful little …! Also, there’s hot and cold soups, and savory and sweet. Also, soup is always served in a bowl and eaten with a spoon. A soup with a lot of things cooked into it may also require a fork. My dad and I are old school soupers; we drink it directly from the bowl. Not all of it. But, the very last of it. Only Soup at home, though. Which reminds me, do you eat soup or drink it? Give that to the debate club next time the category of soup is suggested.

The history of soup is long. In fact, the first soup ever remembered is shrouded in myth and comes down from before recorded history; from the mists of pre-history as they say. And, speaking of mists, isn’t that steam arising from that glorious bowl of soup just such a welcome and comforting sight?

Stone Soup. It is arguably the first soup ever. I did my doctoral thesis on this soup and you can read it online at www.soupsnits.com. (If you are looking for a domain name with “soup” in it, look no further.)

I don’t want to get into the particulars and highways and byways of the elemental, mineral rich Stone Soup. Enough for now to know that Stone Soup is made with stones.

A little later in time — but not that much later down the historical pike — is the Polish mainstay, Duck Soup. Duck Soup (you guessed it) is made with a duck. (Take the children away from the screen for a moment for this next soupy detail.) Polish Duck Soup — CZARNINA — is made with the blood of the duck; usually the same lucky fellow what’s in the soup itself. 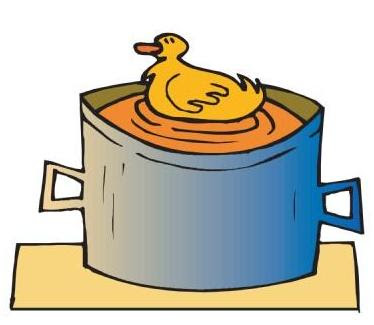 Here’s what you do for this soup. If you want to make this soup you go down to your local live poultry place, hold your nose, pick out a nice looking duck, pinch it’s nose (to test for tenderness; also known as the “pinch of death” in Polish), have the creature summarily executed, and the blood collected in some container. My mother very often took me along for such preparations for duck soup. She would always bring a scrupulously clean jar, what to collect the blood for the soup in. The next day, usually a Sunday, delicious CZARNINA! A deep dark chocolate brown soup and enriched with raisins, dried prunes and dried apricots accompanied with homemade egg noodles, faintly sweet and sour (there’s some vinegar in there). My mother always boasted about the number of eggs she used for her soup noodles. Hand cut, but of course. Or sometimes the Polish competitor to the sublime Matzo Ball, big globby "drop" noodles. Spaetzle to you foodies.

At our house we have recently perfected a superlative soup recipe. You will notice a distinct Latin flavor in the soup recipe below. It's the Sofrito in my soup; and, the Sofrito in me. For the vegetables for this soup also, you could mosey over to your neighborhood Oriental or even Indian (Curry-Indian) market.

You will also notice that the THE SOUP soup recipe below is composed for the knowledgeable cook. I don't want to teach you how to boil water for soup.

[If you have read the recently, ahem, revamped March 6, 2011 New York Times Magazine you will have seen Mr. Mark Bittman's article on soup; he's that toss-it-in-the-pot and lick your fingers while you are passing the kitchen on your way to the veranda how to cook "easy" guy. Well, easy yourself, Mr. "Biteman"; your article gives recipes for the so called four basic soups. Actually there are five soups. (What's more, I have the distinction of creating herein the Unified Theory of Soup. I boiled it down to one soup! Ha!) So you forgot the fifth class in your smarty article on soups, one that even my eight year old grand daughter knows... blood soup. I am, however, a keen fan and will overlook your omission(s) on soup.]

And, also — and following up on the previous — you can even leave out the Sofrito and flavor the soup to your taste. But don't stray too far from this soup recipe; try it the way it is presented first, then go your own creative ways. I don't want to leave you with the idea that the only thing of any significance in this soup recipe is the water itself. We live in post-modern relativistic times; but, hey, a good bowl of soup is something everybody can agree on. Soup the world!

Made with Chicken, turkey, duck(?), beef, lamb, a nicely smoked pork cut, cured or smoked sausage, fish and/or shellfish. If you must ... water. Don't forget Mama's little flavor secret: a Bouillon cube. (There's something on the grocer's shelf called Better Than Bouillon. Get that. Good product.) Also, to "beef" up the Beef flavor, Maggi Liquid Seasoning. Click here for more on the latter.

The meat/fish-seafood used what to make your soup can be served in with the soup or not, as you prefer. Vegetarians of all stripes, this soup can be made with vegetables and the broth of your desire (Don't even think about it, we're talking soup I know; but "Broth of Your Desire" also just happens to be the title of my upcoming potboiler romance novel. We're bringing Favio back from the dead for the cover: picture him in a cauldron of soup, scantily claid (That is no typo, it's a souped up conflation of "clad" and "laid".) female Amazons dancing around in a circle by the firelight, and drums, and moonlight. Just like the time when I was in a similar soup ... But, never mind.) Miso might be a good vegetarian soup base, but careful to keep it "blond" so it doesn't fight the essential kale and beans.
Enrich with a can of broth and a bouillon cube.

-Annato (achiote) seeds boiled in a small amount of olive oil to render the color and flavor (remove and discard afterwards).
-Minced garlic (lots), onion, cilantro, aji dulce, tomato, long mild frying pepper. Fried briefly in scented oil, then added to soup pot. This is not an ironclad recipe. "Sofrito is what you make of it."

-Potatoes, cubed.
-White beans. Your choice.
-Fresh Kale, chiffonade/ribbon cut
-Additional vegetables (your choice and imagination): Bite size cuts of carrot, zucchini, chayote, and any of the many Hispanic market tubers (e.g., yucca), even green plantain. Go nuts. Simple is good too.
-Salt and pepper to taste.
-A small amount of dried pepperoncini flakes, optional and to taste.

As our mentor Jacques Pépin always says ... "That's It."

* And, lastly, you can count on soup. Really. Yes, friend, count the “soup” mentions in this article and the winner gets to have me come to your very own home to make the fabled CZARNINA. You and your family and friends will get the full duck soup experience.

We’ll start the soup-traganza with a visit to a neighborhood live poultry market, or I can personally dispatch that pet duck that you got for Easter and is now just a total nuisance anyway. (But, pleeeeze, spare the children! this part of the soup.) We’ll finish up the soup meal — and adjourn to the family room and/or bedroom for the traditional post CZARNINA orgy. (Just being a little like Soupy. Soupy Sales that is: a Detroit original who had a kids show I watched religiously at lunch time at home.) Click on that and maybe get to know where my sense of humor comes from.

If you really want things hot ... Click on this.

And, if you are the winner of today’s soup contest, this is something like what I would suggest for my welcome …

Since we're in the Polish category, thought you might like a listing of the traditional Polish soups. Click this for more information on the "top 17 soups from Poland".

All this about duck soup reminds me too of my dear old uncle Jaworski. At a family picnic we found him at the side of the duck pond, dipping bread into it as if it was soup. In fact, when we asked him what he was doing, he happily announced that he was enjoying some fresh duck soup.

On a totally unrelated note to soup, did you know how Donald Duck met his maker? Donald Duck had a reputation for never getting it right. On that fateful day, dear Donald was a-walking down the boulevard, when he stepped under the path of a falling piano. Grand as it was, a fellow across the street saw what was about to happen and yelled, Donald! Duck! Well, true to form our pal just stopped and turned around to see which one of his fans was greeting him. 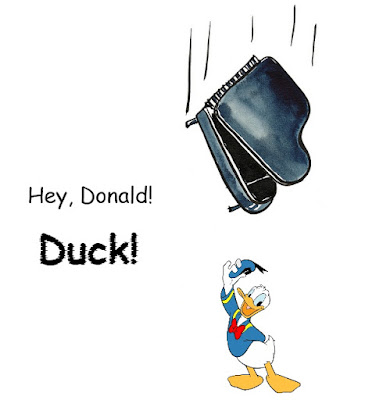