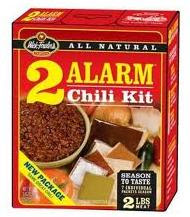 In order to perform our due diligence in researching the recipe for the definitive Texas Chili Con Carne I unequivocally turned to my Guru O’ Chili, died in the wool Texan, Mr. John Geddie, of Houston, somewhere in the great expanse of the Lone Star State.

I asked him for his recipe for “Polecat Chile” so that is what he sent. Italics are his words verbatim. That’s right, Polecat Chile. Don’t be deterred. It’s nice, for sure. You like. Yes? Yes!

As you may know the subject of Chili is vast. Mostly due to the inability of anybody ever to come to even a scintilla of agreement about what is good chili and what’s supposed to be in it in the first place. Then add in all the ego that needs to be cooked in with it and you have nothing but myriad experts each laying claim to chili greatness. For the truly too-far-gone there is the annual trek to Terlingua in early November for the fabled Chili Cook-off. Here we must pause for a moment of silence to express our everlasting gratitude to the legendary Mr. Wick Fowler and his award winning 2-Alarm Chile.

If Mr. Fowler’s concoction is a 2-alarm, John’s is a 4-alarm. In his words, I wouldn’t recommend drinking whiskey with this chili as something might catch fire. Cold beer is much better!!

For this recipe we are making the distinction between “chili” and “chile.” The latter being the fruit of the plants from the genus Capsicum, and a whole vast another subject in itself. When we say “chili” we mean a Bowl of Red, mister. Texas Red. Mother’s milk to the true native son.

[Purely aside, in our travels throughout the beautiful state of New Mexico, chili there is either a bowl of medium red chilies stewed with beef or mild green chilies prepared with chicken or pork. The green chile pepper that the town of Hatch New Mexico specializes in is a truly great little known item and we all await Ms. Martha Stewart to introduce it to the world at large. A bowl of New Mexico style chili and a plate of rice; you have a meal. If you like some red and some green, you order “Christmas.”]

But we’re talking Texas Red and I don’t want to have the Rangers on my tail for talking up anything else.

Factoids directly for the knee of the Chile Guru Hisself: Texas chili does not contain tomatoes! Purists say that it should not contain beans.  However, I think a can of pinto beans (drained) put into the mixture makes it thicker and tastier. [I have to interject that time seasons us all, and my Chili Guru is no exception. In his wizened years he is giving some ground to the much debated “bean.” The subject of beans / no beans is so charged that even to get this close to the argument causes me to want to call for the plane and jet to neutral turf at my villa high on a hill in Switzerland overlooking Lake Como. It’s so lovely and serene there, so any excuse to pick up and go, I’m there. You can see George Clooney’s place from the south porch. We don’t mix with that sort, though.]

But first, a few items of historical reference on my Chili Guru, Mr. Geddie. John and I were contemporaries in my early days as a bachelor in NYC. We were part of a gang of extremely handsome, intelligent, and very hip young men who prowled the streets of the Upper East Side looking for love in all the usual places. I married a Pan Am stewardess and she introduced John to a lovely little Frenchy, Sylvie; a for-sure direct descendent of Joan of Arc, no less. Well Saint Joan’s spirit lived in that young lady and she eventually conquered good ol’ John too. We hosted their wedding reception at our place with a bathtub full of bottles of French (directly from France via Pan Am) Champagne. The story goes about the tradition in Silvie's family to test for the intended young man’s likelihood to be a good husband. Our John was presented at the end of one meal with a pear and a knife, with the challenge to peal the fruit in one continuous cutting; no breaks. Nice idea. But, give a guy a break. Yet, he passed the test. I was given a similar task by my Southern in laws. It had something to do with cracking a pecan with a… private part. My eyesight wasn’t that good at the time, so they had me do it with a coconut. That in-law family of mine (I was the “outlaw”) from down in Dixie was obsessed with nuts and nutcrackers. They are part of a whole sub-culture of people down there who spend inordinate amounts of time looking for the best nutcracker. Christmas was sure to see a new, better device under the tree.

Last, John Geddie is an attorney, and in the interest of full disclosure, I have to reveal that he was not born in Texas. His credibility on the point of Chili, however, is uncontestable. Listen: Due to circumstances beyond anyone’s control, on that blessed day (cursed if you talk to his ex-wife) even though John could not be delivered into this world in the Great State of Texas itself, his father saw to it that there was a box of bone fide Texas dirt under the delivery table. Well, that’s what John told me and just because the folks from that neck of the woods are known for telling the tall tale, I have no proof (yet!) that was other than the way he said it was. We’ll see, Lawyer John. The jury is still out on that one.

The following recipe is modified for the average home. The original, as prepared by me under Mr. Geddie’s supervision was served at a block party in the Park Slope section of Brooklyn in the early 1970’s. The version we made that fateful day was for Polecat Chili. If you are a purist you can use the quintessential polecat, or even a possum. Squirrel will do; just. But I would stop there, and not suggest alligator, fish, or shell fish of any kind. And, please, this is not some gay affair (though there is nothing wrong with that) that you stack on a plate over toast points and grilled marinated Portobello mushrooms, with a garniture of sherry infused figs over mescaline in a curry fume under a spun sugar dome. JUST TOSS IT IN A BOWL, OK? And, most definitely we are not recommending any illegal game, such as some of the wonderfully delicious wild birds. The story goes about the new game warden in the territory who stops an old timer who’s toodling along with a dead whooping crane strapped to the front fender of his jalopy. “You know, mister, it’s a federal offense to kill one of those birds. It’s an endangered species. I’m new in these parts, and so I’ll let you go with only a warning. But, by the way, how does whooping crane taste, anyway?” “Not bad. But I prefer Spotted Owl and the missus is partial to Bald Eagle.”

Before the big reveal, a word from his nibs: I don’t have a specific recipe for Polecat Chili, if you will remember, it is a work in progress. However, here is how I usually make it:

1 ½ pounds of good meat, usually sirloin, ground “chili grind” size which is larger than hamburger size.  If the place doesn’t know what chili grind is then have it ground only once.
A big onion (or two if you like lots of onion)(chopped not so fine)
A couple of cloves of garlic (pressed)
A big bottle of chili powder (6 oz. or so)
Some cominos (ground cumin)
Some good oil, like canola or grape seed oil
A little salt
Some cayenne pepper

Using a large pot, heat some oil (not a lot – just enough to keep the meat from sticking) and cook the meat, onions and garlic together until the meet is browned. Then stir in chili powder until the meat has a dark color (anywhere from 3 to 5 oz. probably). Add a dose of cominos as well (probably a tablespoon or two). Mix it all up with the meat continuing to cook over a medium flame for a minute or so. Then add water until the mixture has a thick soupy texture (don’t use too much water or it will have a thin soupy texture). Start tasting it right away.  If you have not put in enough chili powder then put in some more, remembering that it is easier to add to this mixture than to take away from it. Plain chili powder isn’t usually all that spicy hot. It generally has a little cayenne pepper in it but not a lot. You can spice it up to taste by adding a little cayenne. As you can see, the quantities are dictated a lot by the strength of flavor you want to have. For example, I like a lot of onions and cominos, but others might prefer less of either or both.

Cook the mixture over a low (low!) flame for 4 – 6 hours.  Freezing it for a few days is supposed to enhance the flavor.

I inquired about the use of masa harina (corn flour used for tamales). It does have a distinctive flavor: Masa harina works like cornstarch.  If you need to get it thicker (that is, if you accidentally added too much water) then use it.  Or, if you decide not to use beans, then use it. Wick Fowler used to put in some masa harina with his five alarm chili mix for that purpose.

Serving Suggestions: Over Fritos with chopped onions and grated cheddar. Or, my favorite, over steamed white rice with chopped onions and grated cheddar. [I interject again to suggest the addition of chopped egg. The idea for that accompaniment I got from the old Caucus Club Restaurant in Downtown Detroit. Right across the street from the erstwhile London Chop House, where I was introduced to the ritual pleasures of the whole steamed artichoke with vinaigrette dressing. Which is also a great dressing for Tête de Veau Vinaigrette as served covered in a pure white napkin at the once Café Des Sport in New York City.]

Please excuse my digressiveness. Ever since I adopted a more wholistic world view, everything seems to be related to everything and I can, well, digress.