Keep Your Hands to Yourself! 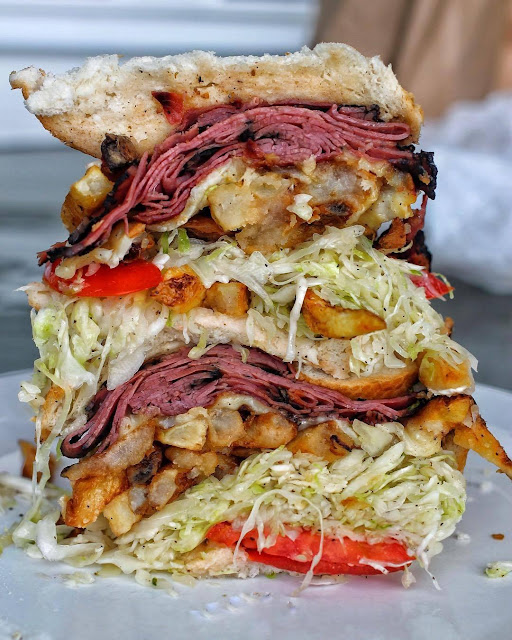 Cooky Cat has a pet peeve. It's about overly handling food. Way unnecessary if you ask this particular cat. If you check in to any number of television shows featuring the doings in professional kitchens, you can't help noticing a lot of fussing and primping and fussing and arranging of food onto the plate. The more "haute" the more fingers on your food. Way over the top.

The issue is partly about cleanliness. It's also about not wanting too much hand contact on our plate even under the best of sanitary conditions in the first place. We won't get into Cooky Cat's aversion to those kind of stunt food creations that all but require fingers touch-touch-touching every little tidbit on the plate. Ugh! This bouche is not amused. It's wonderful to be sure, and a treat to the eyes to see something come to the table as a personalized one of a kind work of art. But, hey, it's food. What's all the fuss? We are not probably going to win any friends for saying this among the haute cuisine crowd. Your pampered palettes are so refined and sensitive that you truly deserve every grape peeled, every watermelon seeded. To each his own. Let's agree to disagree.

Ok, then there's the exception to the rule. Sushi. Now that even the local convenience store is offering a selection of sushi, you know there are a lot of hands involved. Used to be that a sushi chef had to train religiously for some time before being placed in service. There's sushi, and then there's sushi. Just to say, we know where to go when we want the sushi.

As a rule the only hands we would want touching our ready to eat selections are those of a sainted grandmama. In that instance, the touching is part of the love that she puts on the table. But, somebody we-don't-know-what-their-idea-of-clean-is mixing our salad with their hands, no way. Please. Furthermore, even with clean hands, toss our salad with some utensils. We don't care how good it feels to you. We're not paying for the cook in the kitchen to be having a sensuous experience with our food.

Cooky Cat is most fastidious in the kitchen. If cleanliness is next to godliness, then Cooky Cat is one heavenly critter. Of course, who would not agree that scrupulously clean is necessary when preparing food. The area in general, the utensils, the ingredients, and your hands. Our rule is that if your hands touch anything that you wouldn't have dear mother taste, then you wash your hands.

We once went for take out into a buffet type restaurant and saw some kid tidying up between the serving trays in the hot table with a dirty rag. Never will go back to any of their establishments. The kid didn't know any better probably, but the manager either didn't care or didn't care to train the lad how to handle food.

Another time in a fastidious ashram kitchen we had someone helping who would continually touch their lips, hair, wipe their brow. Even when very gently asked to refrain, the habit was so engrained and unconscious and the individual broke down in tears. Seems to have been under some emotional duress. As if that gives you a pass on hygiene? Not. In an ashram things aren't always what they seem. But clean is still clean no matter what karma you are processing, don't you know. You can't use the "I saw something nasty in the wood shed" excuse for too long. It's a cold comfort to us that our food arrives after having been fingered up the wazoo, even with clean hands.

We are reminded by a faithful reader how all too often a wait staffer in a restaurant will serve your drink, fingers on the rim. FINGERS ON THE RIM!!! Can we have a hearty "f#*kyou" with that? It's kind of a double bind situation. The waiter or waitress obviously doesn't see the problem. You can send it back and ask for the drink to be served properly. But, who knows what kind of buttons that could push and what the offended party might do to your other items as retaliation. Maybe to not consume the beverage and lay it on them as you leave. Or tell the manager. Ugh! We don't like to go out to dine and have it become an exercise in training the wait staff.

There's the story about the man whose waitress served him his Coffee ... with her thumb in it. He let that pass. Then, the eggs ... same thing, thumb in it. So he confronted her on it. She said that the doctor told her to keep her thumb warm due to arthritis. The man told her to why not put it somewhere warm where the sun don't shine. She said that in fact she did, "But only in the kitchen".

David Wronski is also such a fussy frisker. Once in a fancy beer bar in Amsterdam a friend wanted to get a hit of the aroma of David's specialty beer. Without even asking the guy thrust his nose down into David's glass. David refused to drink it afterwards. The fellow was all up in arms;  a combination of embarrassed and offended. The point was made though. It was partly about the simple fact that the nose has, well, stuff in it that could drop out. Also, the fellow acted without the courtesy to ask permission. A boundary issue. Sort of like you don't dash over to the next table and reach onto some stranger's plate for a bite of something that looks appealing. You don't, do you?

Even if the kitchen staff has any number of diplomas and accolades we prefer our food be handled as little as possible. Some may not mind. We definitely do. The same goes for the wait staff. Clean hands when serving. After busing, wash those hands again. Handling money, wash 'em.

If you don't have any issue with this particular "fussiness" on Cooky Cat's part, then let's see if you are up for this challenge? Next time you go to your swank eatery why not summon the chef to your table and as a gesture of thanks and appreciation go ahead suck his fingers. It amounts to the same thing, really. Think about it.

This whole thing is something you either get or you don't. If you do, and especially if you manage people in a kitchen situation, get clear on your own standards and then train your staff and keep vigilant. The same as you would insist upon with proper knife skills.


A great lady we knew once held a Thanksgiving dinner. The maid brought in the traditional bird and it slipped off the tray onto the floor. The hostess simply said, "Please take that back to the kitchen, and bring out the other one." In a pinch one must do what one must do. But as a rule, keep those hands to yourself.