Your Puss In Your Pie 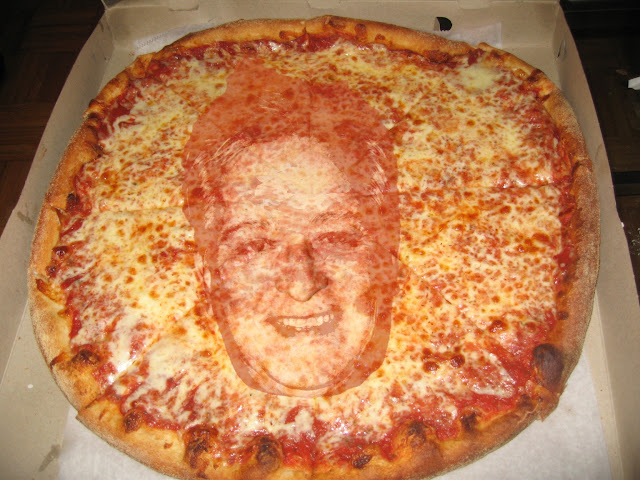 
Here's something new I may have the scoop on reporting.

I was at my favorite “Brick-oven-wood-fired-artisanal-we-do-everything-from-scratch-except-grow-and-mill-the-flour-and-milk-the-water-buffalo” Pizza Parlor and the waitress was looking at me rather intently. I mean, really checking me out. Naturally, I was flattered to think so. But, when I got home and opened the box this is what I saw. Even though it meant letting my delicious Pizza Pie get cold, I thought to take this photo to record the miracle and share it with you.
It turns out that it isn't a miracle after all. The Pizza Parlor* took a tip from the barista next door and is now putting customer's portraits on their pies in tomato sauce as a little goodwill booster.
...
I believe a trend is under way. And, you heard it from me first.

* “Brick-oven-wood-fired-artisanal-we-do-everything-from-scratch-except-grow-and-mill-the-flour-and-milk-the-water-buffalo, which we bred on our farm.”

Posted by David D. Wronski at 2:22 PM No comments:

Posted by David D. Wronski at 9:55 AM No comments: 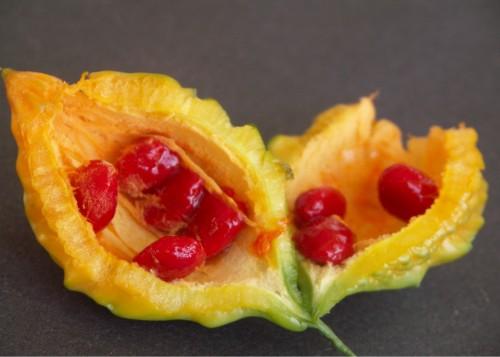 Unless you know about this you might be tempted to say, "Sweet". It does look like a light pastry filled with luscious juicy cherries. But, alas, not so sweet.

In fact, bitter. Way! It's an overripe bitter melon. Usually you eat bitter melon when it is green, even white and very immature. And, they don't call it bitter melon for nothing. It is so. Deliciously so.

Our observation is that most folks in the America do not eat as much bitter and sour foods as they do sweet and salty. Of the four core tastes, bitter is the one mostly set aside. Just a poll of one, but we'll be betting it's pretty close to the case.

Anyhow, there are two types of bitter melon: the Chinese and Indian varieties. Here they are, the Chinese type with a smooth skin and juicier flesh on top of the Indian type. 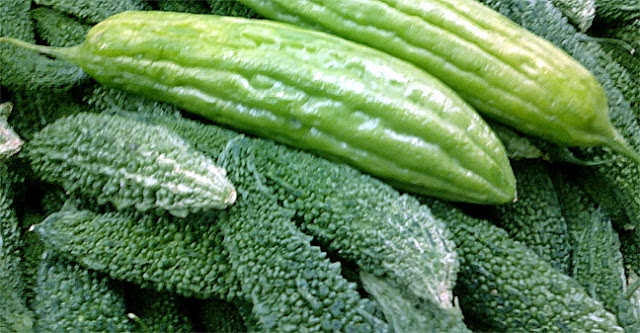 ﻿
﻿So, sir Cat, which one should we buy? Mostly you'll see the Chinese bitter melon, certainly at Chinese stores. It's also showing up in more progressive supermarkets. The Indian variety is mostly still found in stores catering to Indian culinary tastes. That's a fancy way of saying Indian stores. You like?

The Chinese variety is slightly less bitter. That would be an 8 on a scale of 1 to 10; where 10 is pucker up! The flesh of the Indian type is slightly more dense. So, which one? Both!

Recipe Ideas: The Chinese has more moisture in its flesh and lends itself to a stir fry, such as shrimp with thinly sliced bitter melon (garlic, ginger, tamari, Shaoxing wine). The Indian bitter melon, being denser, makes a great braised dish with onions, tomatoes, small hot chili, and Indian spicings (cumin, fenugreek, coriander seeds, yellow mustard seeds, turmeric). Both those dishes, please to garnish with fresh coriander leaves and some slivered fresh scallion.

That was just a Cooky Cat top line. There a plenty of alternatives out there in the Cloud.

When you go shopping for bitter melon, ask about it with the shop keeper or a customer who looks like they would have ethnic history with bitter melon. 100% of the time you will hear them tell about the benefits of bitter melon, most likely about lowering blood sugar; the word diabetes will be mentioned.

Shopping at an Indian food store recently a lady asked if we "juiced" the bitter melon. Hadn't thought of that, but it would make for a good tonic.

Now, we're thinking that if in fact Americans do not eat a sufficient portion of bitter foods in their diet, perhaps that is somehow linked to diabetes? Or, its prevention? Just saying.

Do also look at all the other health benefits attributed to bitter melon.
﻿

Posted by David D. Wronski at 6:47 PM No comments:

You'll want to first know this:

Cooky Cat is, as most already know only too well, at the cutting edge of simplification and efficiency in the kitchen. We leave it to Martha (you know who) and her minions to search the corners of the globe to acquire a gizmo, a gadget, or an appliance for every single lousy, measly step in the kitchen. What they never tell you about is the real world, actual on the ground situation when you have so much single use equipment in your kitchen. They never tell you about the smell you put in the house by using one of those stove top smokers. Or, the mess you make on the stove top when you pan sear like they do on the television cooking shows. In the case of a gizmo-for-every-step, mainly there's the persnickety clean up chore. "Honey, would you like to do the dishes tonight?" You know the answer to that one already. So now you have the answer to that age old household conundrum. Save your marriage; get the Sp-atu-oon©.

Anyhow, "K-I-S-S" . . . "Keep It Simple, Stupid." That is what this Cat does. In Cooky Cat's own words, "Why use a spoon or a shovel [in the litter box], when a paw will do?" Just to give you a little background on Cooky Cat's philosophical underpinnings.

The Sp-atu-oon© is a combination kitchen spoon/spatula; both in one! Can you believe it? You say, "Just what I needed. Why didn't I think of that?"

It's for that dish that you just want to get every bit of from out of the pot or pan. The Sp-atu-oon© is your ticket, hun [Gender neutral usage, on that. Don't send complaint emails]. And, it saves you the search for that spatula when you have a pot in your hand, and it's bloody hot and you're in a hurry, and . . . "Where is that damned spatula?" You've been there, you know. Admit it.

Each  Sp-atu-oon© comes with a set of four colorful silicon spatula inserts that attach and remove from the spoon in a jiffy via a patented (pending) "affictive sliding thingy" on the convex spoon surface. Dishwasher safe. Wave it threateningly at the kids, and it'll impress those little buggers to do right.

The fit and finish are superb. The joint line between the stainless metal spoon and the spatula is NASA spec. Same as what they sent to Mars, in fact. But, we are not allowed to promote that factoid; so just to say, it's damn good.

Get yours now. Available at better stores everywhere. Or, send a check for $19.95 made out to Cooky At Sales Haven, but write it C.A.S.H., please.

Cooky Cat's people are currently in negotiations with Martha Stewart Living Omnimedia, Inc.'s people to offer the Sp-atu-oon© as a free giveaway at movie theaters that will be featuring Ms. Stewart's new movie project. It's a screwball comedy with the working title, Martha! . . . You Call This Living?

(And, just between us chickens . . . there's a version coming for the table as well. For the clean plate club. Soup and dessert sizes, of course. For savoring every bit, drop or morsel of those wonderful dishes you crank out. Stay tuned. It's on the way.)

Posted by David D. Wronski at 2:14 PM No comments:

A collection of Nature's jewels . . .