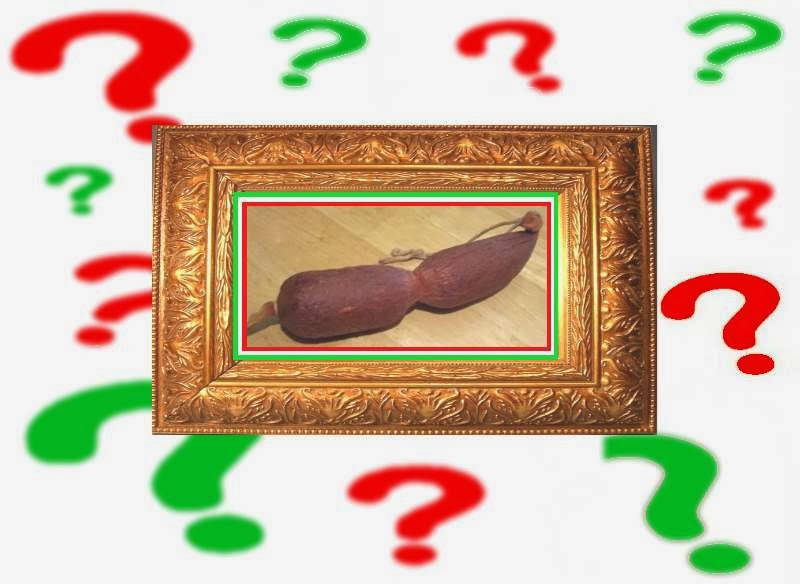 *** We know several of the legions of Cooky Cat followers abstain from such products for various reasons. This is in no way an attempt to dissuade anyone from their path. Just that, when it comes to pepperoni, those who are plugged in are a particular, self-selecting folk. (Can't we all just get along?)


Sometimes, a pepperoni is just a pepperoni. You know what we mean. Unless it isn't. Stay with this, your persistence will be rewarded.

Yesterday we made a trip to the Mecca of Mozzarella , Antonio Mozzarella Factory in Springfield, New Jersey.  Just how good can Mozzarella be, anyway, it's fair for you to ask? Especially in a state like New Jersey where you can practically trip on a ball of Mozzarella just walking down any old street. (Pizza, too.) Well, Antonio's is right up there and worth the trip. It's certainly way good enough. (See the citation for culinary excellence below.)

It was our first time in the shop, so as per standard operating procedure we importuned the man behind the counter. "This is our first time shopping here, do you have any specials for occasions like this?" His casual response, "We have some things." (This and that, forgeddabout it.)

After we selected some house made Manicotti he retrieved a nice size ball of Mozzarella for us from the back. You should know that Cooky Cat is a pepperoni-aholic. So we engaged the gentleman concerning what choices of pepperoni he sold. It seems that everywhere in New Jersey (the USA?) Hormel Brand is the standard. Now, it is a good product, the Rosa Grande variety particularly. And, as aged as possible. But we are always looking for the next level; so we shared, "When I was a boy the pepperoni was very dark and hard. What happened?" Our knowledgeable salesman admitted that it was because makers now use more fat. To extend the profits, don't you know.

Stay with us for more surprises later. But, hey, if you're reading this you must be a pepperoni partisan, so you should like our mash up.

When we usually go to the Italian store for pepperoni, we specify the darkest (oldest) stick or two they have in stock. Low and behold, here is a blogger who is totally on Cooky Cat's wave length. Here he gives instructions for tuning up pepperoni at home (in short, remove any label and plastic and rewrap with a paper towel. Leave in refrigerator for a few weeks to reduce moisture content. Presto. Bravo!).

All right, back to our visit to Antonio's.

After our pepperoni discussion a curtain parted and a new salumeria mystery was discovered. (Maybe not for you personally, dear reader; but, for Cooky Cat it was a first. Later, after an Internet search it seems that this new revelation is in fact currently enjoying its moment in the spotlight as the next new thing. Cooky Cat is not always on the leading edge. But not far from, be assured.)

The counter man asked, "Do you like things spicy, really spicy?" We said we did. "Yes!" From out of the back of the shop (that is where they keep the "good stuff") came a house made aged salumi that has to be the godfather of all pepperonis; and, the holy grail of the pepperoni lover.

It's called . . . 'Nduja. Pronounced variously, In-dooh-ja, In-dooh-yah, and dooh-yah. Per Wikipedia, "'Nduja is a spicy spreadable sausage made with pork. It is typically made with parts of the pig such as the shoulder, belly and jowl as well as tripe, roasted peppers and a mixture of spices. It is a Calabrian variation of salami, loosely based on the French Andouille introduced in the 13th Century by the Angevins.


All right, so how'd it taste? Very, very tasty. The man at Antonio Mozzarella Factory was most gracious. He served us two nice big bites on a slice of Italian bread . . . Everything you want in a pepperoni, all the spice,  all the flavor; but with SPICE. And complexity. Serious and lingering heat. Not punishing, but it definitely speaks to you. We took some back to the Cooky Cat Test Kit-chen©.

Today we are preparing our lady fair a breakfast which will include fried potatoes with a bit of 'Nduja melted in just before serving. Maybe with some thin sliced scallion to please the eye and keep to the flag of Italia colors. As you can already tell, it is definitive just on a slice of good Italian bread; or bruschetta, if you're not in a rush. And, mixed with pasta. Wow!

Speaking of the Italian flag, the kind folks at Antonio's tacked on our bag a reflective sticker with the green/white/red national colors. Presumably as a goodwill gesture to ensure our return and maybe for us to slap on the whip and qualify our ride to travel freely in all parts of New Jersey.

The man wasn't kidding when he said he had something for us first time customers.

It's a place to go. Check it out. Antonio Mozzarella Factory.

Email ThisBlogThis!Share to TwitterShare to FacebookShare to Pinterest
Labels: Pizza