When it comes to cooking . . . This Cat can Cook! Very Cooky!

When it comes to cooking . . .
This Cat can Cook! Very Cooky! 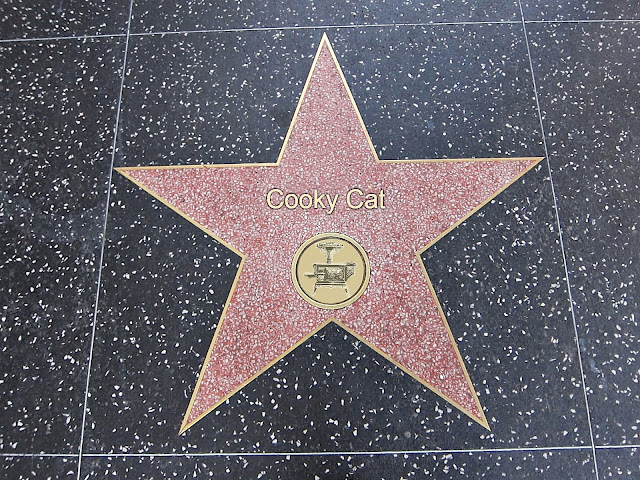 The Internet is full of cats these days. Here's a Cat among cats. The one who put the puss in his boots. The very one whom the Ad Biggies referred to when they said, "let's put it out on the back stoop and see if the cat licks it up."

Cooky Cat cooks from scratch. (No claw-related pun intended.) You’ll find not so much recipes, as suggestions. The world, after all, doesn’t need another cook book. A certain culinary skill is expected to dig this cat.

Inspiration is what is needed. And Cooky Cat brings it. A sense of humor also wouldn't hurt. He kids... but, always, he loves. In his own words, "Just kitting."

The Cooky Cat is into cooking. He can be a playful kitty, sometimes prone to exaggerating the facts (he can be a down right fibber), but always true blue when it comes to steering you in the right direction kitchen-wise. Take what he may say otherwise with a grain of salt. Just shoe him off your lap(top) when he gets too frisky for you.

Cooky Cat can cook anything (he is not vouching for its edibility, however). Don't expect recipes and treatments on the more conventional dishes. [E.G., regarding omelets... Wisk a few fresh eggs, shake and stir in a pan with some butter, fold onto plate. Done. Next.]

Cooky Cat is also very straight ahead in the kitchen. No stunt foods. So don't expect any of those trendy piled high ego displays or cakes made to look like... whatever. Take this pledge: "I will never again watch a cake show on television." About foam... you can't even get him anywhere near the foam of a bubble bath. And, as few gadgets as possible. It took him years to get around to a Cuisinart processor; prior, it was the trusty Benriner mandoline.

He also vigorously eschews the trend to overly combine wildly disparate ingredients or overly sauce and/or multi-spice recipes. Things do have their own taste and Cooky Cat stands for letting the ingredients speak for themselves.

His motto: Create meals from what looks good at the market, always looking first for what is seasonal, fresh, and local. Shopping to a recipe is a way to go, but many times slavishly sticking to that approach can be frustrating if you can't find the ingredients; it forces compromises if what's only available is of lesser quality, and it is certainly the most expensive approach. Quality costs, and pays off in the long run; but when it's on sale, go for it. By and large, you get what you pay for.

There have been comments from certain quarters that the recipes are not detailed enough. The point Cooky Cat is making has to do with conveying the secret ingredient to all good cooking. If you want the specifics, just do a search and zillions of options magically appear. To repeat, the world does not need another cook book!

Now go ahead, scratch around and see what Cooky Cat has for YOU!

A faithful follower of Cooky Cat shows her appreciation. . .